The origins of Cal-look stem from the late 1960s when the drag strips were dominated by the V8 muscle cars, a certain group of youngsters started tinkering on their beetles to get more power, strongly influenced by drag racing. Their aim was to make a street-legal Beetle (or a Ghia and later also Type 3) suitable for racing. This all started with a small gain on their stockers’ performance, but soon evolved into a modified look with larger engines. But it was not before 1975 that the look became known as the California Look. 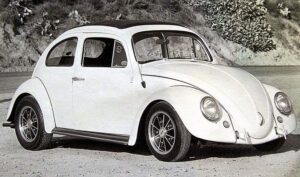 The look mainly consisted of a lowered front end, while the rear axle remains at its original height. As far as the bodywork is concerned, there is a golden rule that says “less is more”. The trim on the cars was soon removed and bumpers were rid off for the loss of weight. However, in California at that time some kind of bumper was required. So FAT Performance came up with the idea of welding together a replacement from a piece of flat aluminium and a piece of round aluminium, which would later be known as the T-bar. Other modifications were the single piece windows, Lucas indicators, and external bullet mirrors. The main rule of the paint was a single colour high quality paintjob often using Porsche colours of the time. Apart from “top chops” no bodywork conversions are allowed. The original magnesium Speedwell BRM wheel is the holy grail for any California looker, but nowadays those are hard to find and rather expensive. Other typical Cal-look wheels are the original Empi 5-spoke and 8-spoke (also known as the Spyder Mag) wheels and of course the Porsche Fuchs wheels.

Until this day the look still lives on in Southern California and has been spread all over the world. And more people than ever re-live the days of the 1970s.